skip to main | skip to sidebar

Saturday, October 31st: “Rear View Films” is a night planned by New York artists/curators Evonne Davis and Emma Wilcox during which experimental works from the Gallery Aferro (Newark, NJ) film archive are projected from within the Iron Maiden on to its back window. The Iron Maiden will travel to and be stationed at several locations around the city so that passerbys can become spectators of the films. The film series will last throughout the Halloween night.

Not only did this outing coincide with Halloween, but also with the fact that I had an idea for a Halloween costume, which doesn't happen often, and I tend to go all out when I do. For several weeks prior to the 31st, I assembled the different items needed and psychologically prepared myself for the commitment of changing my hair for the costume. I had seen "Ladies and Gentlemen... The Fabulous Stains!" in August, a 1981 film starring a 15-year-old Diane Lane and 12-year-old Laura Dern that was never distributed due to poor reactions from test audiences. It's popped up in festival circuits over the since then, and was released on DVD last year. Though the film is so-so, I was struck by Diane Lane's character as an angry confused teenager whose mother has just died and goes on tour with her girl rock band who know one song ("Waste of Time"). Annoyed at the contradictions she sees in the adult world, she adopts a fuck-you attitude and fuck-me look, though her motto is "I don't put out." I loved the blind rebellion and the outrageous look. And that a doppelganger teenage girl cult forms around her. Any reason I produced to not bleach my hair further supported why I should. I felt like my role in this week's outing included being a Halloween participant. 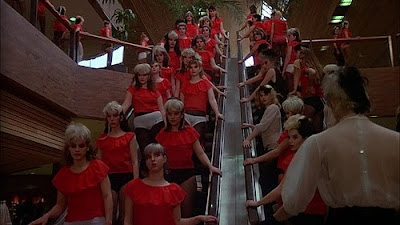 Evonne and Emma experienced a few set backs the week beforehand involving their car, so I picked them up in Newark at Gallery Aferro, which they founded. In the series "Storefront Films," they've been screening films in the front of the gallery and other found spaces, and have run projectors off of car batteries. In theory the plan for the night would work, but we were ready for complications. Ideally, they would have hooked up to the cigarette lighter, but the Iron Maiden's is not fully functional from an inaugural New York break-in in 2007. 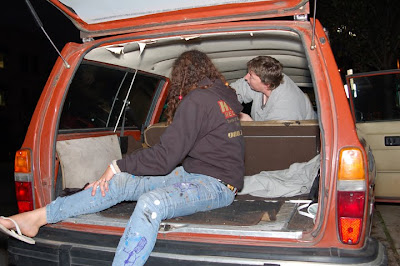 Evonne recruited an intern, Kylie, from work to help prepare the Iron Maiden for its screening debut. They ingeniously attached vellum below the rear window, and applied a magnetic strip along the top of the vellum so it could be taken down when in the car's in motion. Meanwhile, inside the gallery, Nancy Mahl, a curator, listened to the night's plans of running the projector off the Iron Maiden's battery, and offered her deep cycle battery from her boat. This would allow us to run the projector whether the car is in motion or not and avoid possible problems from the rain, while running it off the car battery would require the car to be parked.

Gallery closed, screen installed, costume donned, we followed Nancy to the marina and started telling stories about childhood experiences of Halloween and homemade costumes. Once at the marina, Evonne and Nancy took off for her boat and Emma made an Aferro sign for a side car window. It took a while for them to return. We later found out a drunken sailor puked his guts out in front of them to the delight of his cheering compatriots. As we headed for the city, Evonne and Emma were tired from a trying week, anxious about the starting rain, and wondering if this was going to work. 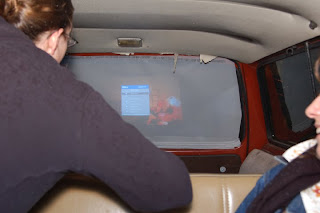 Traffic was surprisingly light, save for the black hole of SoHo, and we dashed across the Williamsburg Bridge to meet up with the curator of the films, Jill Wickenheisser. Parking at Bedford and 5th, Emma and I retrieved dinner while Evonne retrieved Jill. Excited to get it working, they set up the projector and battery and put in the first film, which fit neatly into the rear window. It worked! Amazed, we ate in the car. Pretty simultaneously, Evonne discovered the that her requested no-hot-sauce pita was filled with hot sauce, and the deep cycle battery failed. It began to rain harder. 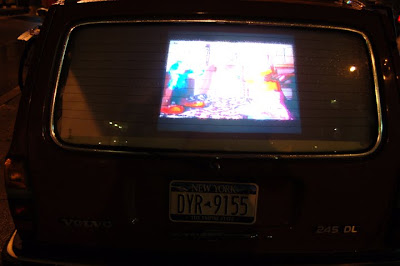 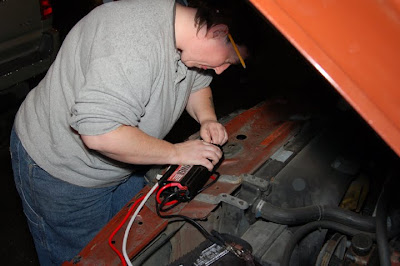 Undeterred, Evonne attached the car battery to an inverter and an extension cord and got the projector running again, though the cord got surprisingly warm. Some costumed people noticed outside, and huddled under umbrellas to watch the stop-motion clay animation of two figures destroying each other within the safety of their home. We moved to the Bedford L stop at 7th, where Jill thought we would garner the most attention from the faithfully costumed. A man in a brightly decorated bicycle-powered vehicle blared Mexican music, circled back again and again. The rain picked up and few people paused to take in the spectacle in the rear window. Jill was a bit incensed. 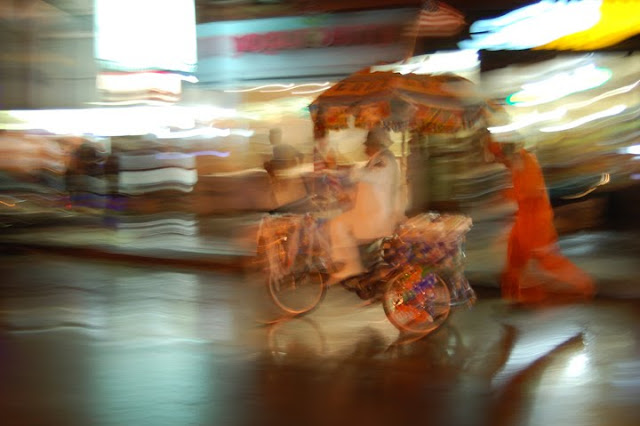 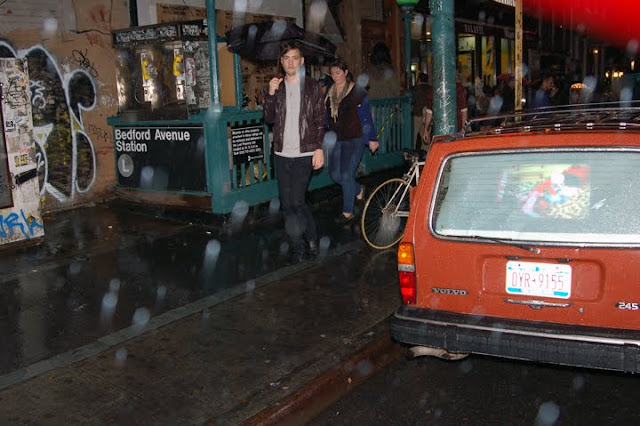 Evonne and Emma had thought of going to various art institutions and nightclubs around the city, with the idea of competing with scheduled events, commando-style. While this idea had been revised, they still wanted to show up at random locations, counting on the elements of surprise and anonymity (i.e. not dependent on friends as audience members). We were making it up as we went along, and various needs and desires of the passengers and driver directed the itinerary. I had house guests who had arrived that day in New York, and I needed to get them keys to my apartment. Jill wanted to meet up with a friend and go to a party in Bushwick. Which we did, but dropped off the friend and Jill continued on with us. Emma found her favorite conceptual costume across from the party: a stroller was wrapped with yellow police tape and the child inside wore red; child as crime scene. 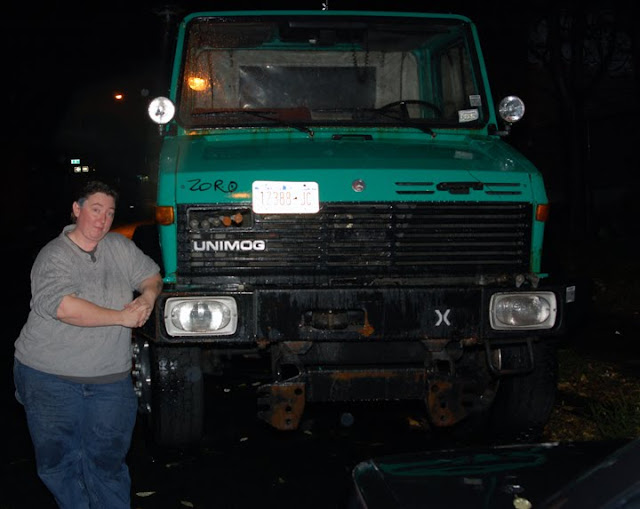 Somewhere along the way we ran into this gem of a vehicle.

The last I heard from my friends, they were at Katz's Delicatessen on Houston, so we headed to Manhattan. We parked behind a taco truck across the street from Katz's and began to explore the DVDs Jill had picked out. The trick was to find films that didn't depend on sound. One showed a woman applying lipstick that soon went beyond the boundaries of her mouth. Another was a pastoral story told through stop-motion photography. I got out to watch the scores of costumed pedestrians and take photos of the Iron Maiden. It's hard to remember all of the great costumes, but we saw a really great spider and a gaggle of stewardesses. A man dressed as a belly dancer began to lose his pants and spent the next 20 minutes near the car trying figure out how to wrap himself back up. There was so much to see, it was understandable that our act of renegade art-film screening by and large flew under the radar. But I loved that it was there all the same, that it was trying just as hard as everyone else to be noticed, that art was waving its flag amidst a sea of semaphore. It's either do that or not at all, and that's too sad to think about. 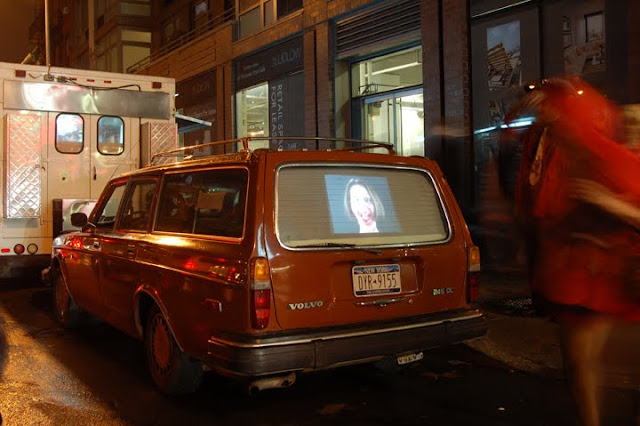 The taco truck truck provided superb tamales, and I encouraged Evonne to try the cheese, forgetting there were green chilies inside. Evonne is the gamest mild-paletted woman I've ever met. Despite her complete aversion to hot food, she made a great effort of alternating Sprite, bites of the tamale, and gasping. I'm not sure whose benefit it was for, but it was amusing, visceral, and guilt-inducing (I still feel badly about it). This woman just wants to eat dinner, why does it all have to be hot?

As it turned out, my friends arrived in Williamsburg at the same time we arrived next to Katz's. Determined, I drove us back to Brooklyn, and dropped off Jill, who was experiencing possibly rain-induced pain from a past injury. Emma, Evonne, and I were feeling a little wiped out, and met my friends at the Roebling Tea Room for beers. Cory was visiting from D.C. with her boyfriend, Robert, who was vistiing from LA. Another friend, Jason, was visiting from Boston. He was wearing a wig as his costume—a version of himself with hair. 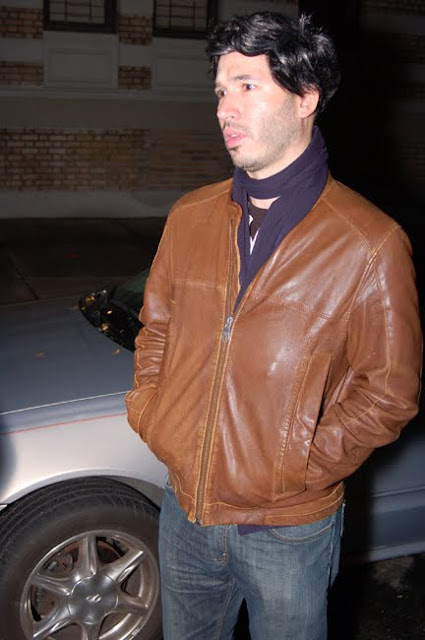 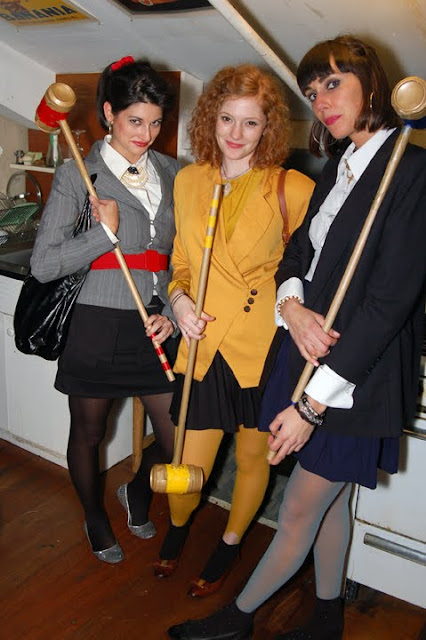 Another agenda was a party I heard about from a co-worker, an annual Halloween party that had an invitation, a map, and explicit costume-only instructions. Cory and Robert retreated to my apartment, but Jason joined us on what we decided would be the last stop of the night . The party was at the top of a old loft building, and the apartment ran the length of the building like an attic. I wanted to bring some people downstairs to see the films, but this proved challenging. Even someone we knew walked away from our invitation. One of the hosts was part of an Andy Warhol duo, a Factory photo booth was set up, and I found my favorite costumed trio of the night, from "Heathers," complete with croquet mallets. As Jason and I marveled at the Atari-ed raptor, a woman told me she knew who I was. I couldn't believe it! I could go home happy. She was even more obscure than I—an interpretation of a Tarot card. 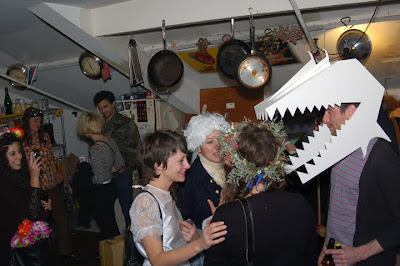 Back at the Iron Maiden, we watched a few more films to close out the night. One was of a very large boy holding on to and petting a bunny with increasingly hard strokes in slow motion. It was very uncomfortable to watch. Emma found a film with naked women from the internet and the very un-Halloween biker party across the street began to enthusiastically respond to it. As we drove away, we realized we had just gained an hour with the end of daylight saving time. 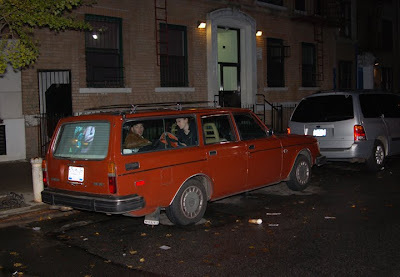 As part of my project duties, I drove Evonne and Emma home, which is in Inwood, and for the uninitiated, is at the very northwestern tip of Manhattan. Using a trick I learned from Outing #2, we took the Queensboro Bridge to FDR Drive, which turns into Harlem River Drive. I've never been that far up Harlem River Drive, under the grand bridges of the Cross Bronx Expressway and the High Bridge. The area reminds me of driving through Rock Creek Park in D.C. or through the one in Pittsburgh. My ideas of it being a testament to awe-inspiring civic engineering belies the reality that Highbridge Park has been in disrepair for decades, the footbridge closed since the '70s. But I still felt I was driving through some other era of New York.

Evonne and Emma unloaded their equipment and we said goodbye. I was really glad to have spent time with them—we had had brief interactions previously—and felt like I got a better sense of each through the night's slings and arrows, and the various in-depth conversations we had. A long night quickly over. I took Jason to his friend's house on the Upper West Side, then drove myself home. I woke up later that morning to drive myself and my house guests to a critique, and knew the Iron Maiden's future was uncertain. Maybe I'll wait until the spring. 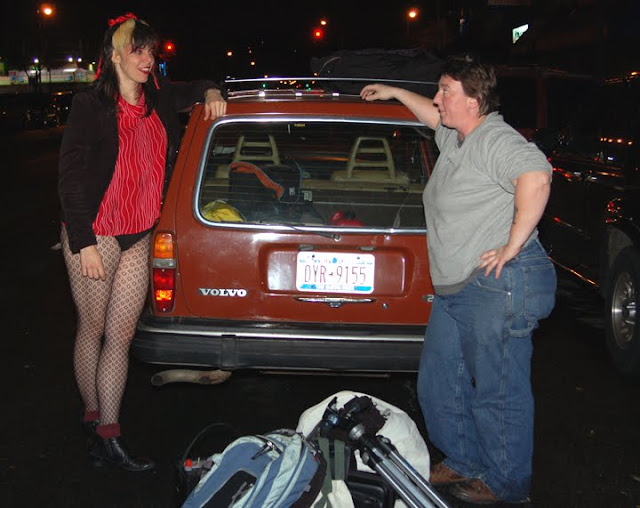 The Last Days of the Iron Maiden's Fan Box

The Last Days of the Iron Maiden on Facebook

naomi
Naomi Miller is an artist in New York City. These blogs follow her art projects that involve her 1978 Volvo station wagon. Recently, she has been collaborating with Katarina Jerinic on the project "The Work Office (TWO): www.theworkoffice.com